Asheville, North Carolina’s genre hopping songwriters, The Resonant Rogues, have been winning over audiences worldwide with their signature blend of string band music since 2013. Following their musical inspirations from the Appalachian mountains to the Balkans, through Paris by way of New Orleans, their original songs speak to the heart with poetic lyrics, and appeal to the ears with stellar musicianship and arrangement.

“American folk music has always had a populist perspective, a vision of music made by the people, for the people. Asheville, North Carolina roots band The Resonant Rogues know this well, for they’ve traveled the byways and highways of America, even crossed the water to Europe and the Mediterranean with instruments and songs in tow. Anchored by the songwriting duo Sparrow and Keith Smith, the Rogues have shared songs with train-hoppers in New Orleans, busked on the streets of Budapest, learned Turkish Romani dance in Istanbul, and marched in protest in the hills of Appalachia. Throughout, the stories they’ve heard and the people they’ve met have fueled their music, which abounds with influences like Eastern European Romani brass bands, New Orleans street jazz, old-time stringbands, Woody Guthrie anti-fascist folk, French jazz Manouche, and Middle Eastern rhythms. It’s not easy to pull off such a bold combination of genres, but The Resonant Rogues learned this music in person from the people who created it, so they have a tie to each tradition and a working knowledge of what this music means to the ordinary people that make this music every day. It’s a tintype view on the modern world,a cracked image that reflects the past through a prism of the future. –Hearth Music

Sparrow’s passion for movement and sound started early, with much time and energy spent on choir, orchestra, musical theatre, swing dancing, and figure skating. A voracious student, she has immersed herself in an enormous range of performance arts. Sparrow plays old fashioned originals with The Resonant Rogues, and also leads a traditional jazz band called Sparrow and her Wingmen. She also occasionally performs as a solo artist, and released a album of her original music in 2012.  Her instruments include accordion, banjo, and fiddle.   She has been belly dancing since 2003, teaching and performing in Asheville and around the country. In 2006-2007, Sparrow attended the Circus Center in San Francisco, primarily for acrobatics, and has toured and performed with Asheville’s Runaway Circus. 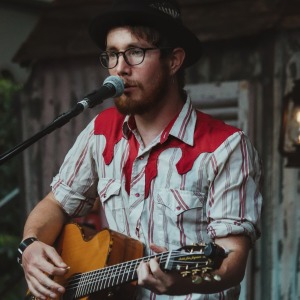 Keith Josiah Smith – songwriter, guitar, vocals
Smith’s musical journey began with playing drums in punk/rock bands in his early teens. He then developed a passion for songwriting upon learning his first chords on the guitar, and hosted open mics and a community music festival in his hometown of Menomonie, WI. In the spring of ’09, at the age of 18, he left home and began traveling around the USA, hopping freight trains, and street performing for a living. In 2010, he traveled to Nashville, TN with hometown friend Jason Dea West (Intuitive Compass) and formed Barefoot Surrender with Benjamin Tod (Lost Dog Street Band). In the ensuing years he accompanied many other street bands between the Pacific Northwest and New Orleans, LA. In 2012, he gained a renewed focus on songwriting and studying the guitar, which led him to recording a demo in Seattle, WA. With that new demo in hand, he spent the next 10 days traveling across the country via freight train, visiting musician friends along the way and landing in Asheville, NC, where he serendipitously met a woman named Sparrow who needed a guitarist for her recording session in 3 days. They formed Resonant Rogues in 2013, and Keith’s adventurous spirit is now satisfied with touring around the world with his Wife, Sparrow.